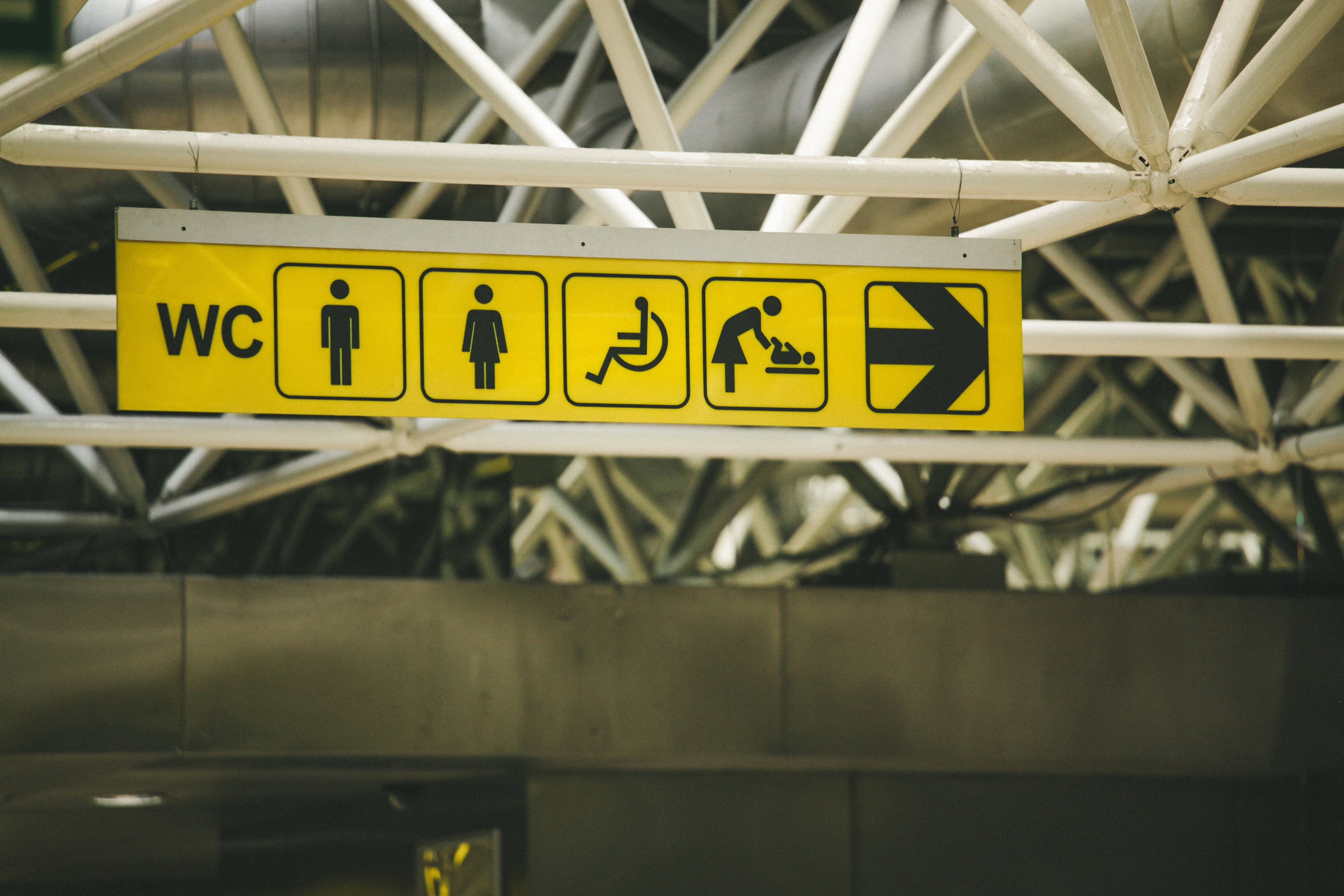 Attacking a Man as Big as a Fridge

I was a national sales person for many years. I could be on the road as much as three weeks a month and working 6 out of 7 days each of those weeks. I worked hard and made myself, and the company I represented, a lot of money. As I was nearing what would become known as the end of my desire to continue on working anywhere at such a pace, I was finishing up a three week sales whirlwind. It was a very profitable trip. I was a very effective sales person. Thank goodness my partner and lover at the time flew out to join me for my journey back home. I was beyond tired. I was “burned out”. He knew I was exhausted and was worried about me, rightfully so. The last night of this three week trip was spent mid-week at the Cincinnati airport. I add “mid-week” to the mix because, if you are a traveling sales person, you would immediately know (if it’s not near a holiday or school event like spring break) exactly WHO is at the airport… mid business week? The traveling salesmen tribe: A subculture. There are numerous notables. Our uniform is one of those notable, since we travel and basically live out of a mini suitcase that needs to be to be a “carry-on” for fear of checking the bag and having it lost. Oh, is THAT such a nightmare! A lost checked bag may as well have them send the lost/found bag directly home because we will be in our third state by the time they find it. The bag itself needs to have just the absolute basics: underwear, black clothes made of wrinkle free fabric, and something nice in case you are going out to dinner with the “big-wigs”…nice, not too sexy… important point. Amateur traveling saleswomen wore high heels. I could write lots about life on the road but all I want you to know is how tired I was at this particular time, and how I was among a certain subculture group of middle/high income sales people like black ants all wondering around the Cincinnati airport at dinner time.

I was too tired to eat dinner inside the “terminal C” restaurant. My anxiety was high so the sounds of chatter and clanking dishware bouncing off the walls was beyond my tolerance. Antonio went to fetch our dinner “to-go” while I sat in the corridor watching the ants march by.

I heard a child crying. Children cry. They are tired, hungry, sick, angry, bored, scared… they cry. No need for alarm. But the crying was getting louder and was like nails down a chalk board to my anxious constitution. I thought, “Geez…make this kid stop crying already please!” I saw a giant of a coal black man dragging a little girl down the walk way. He was the size of a refrigerator. The little girl was being held up by his left hand. She was like a sack of potatoes wiping up the floor with her legs. He stopped about 20 feet away from where I was sitting and yanked her upright, as he shook her scolding her to behave. I couldn’t hear the words, but I could feel his intended threat to her, if she didn’t obey. He took her hand and tried to walk with her, but, again, she protested by way of simply choosing not use her legs to walk, but let them drag. Now they are approximately 10 feet from me.

This time he let her slump to the floor. He reached down and took her by the ankle, easily lifted her up in front of him, her head about 2-3 feet off the floor, and he hauled his arm back like a baseball pitched in the big game and WHACKED her backside…. REPEATEDLY.

I was in shock. NOT ONE “ANT” WITHIN MY SIGHT MADE ANY ATTEMPT TO SAVE HER.

I don’t remember what happened next. I was told by others later on. All I remember was “coming back into my consciousness” upon impact of my body against the refrigerator. I remember yelling at the impotent “ants” to call security, the police, NOW! Two people came first. A woman took the little girl to the side, and a man stood there…both scolding me for “going too far”. Then the security arrived, each contestant to his/her corner… Antonio was quietly near-by, watching as the security is asking questions and trying to figure out the biggest offense… Was the man abusing or just disciplining his daughter? Did a crazy short chick really assault the giant, and is he seriously going to press charges?

The “ants” didn’t want to get involved, so no one was willing to miss a flight, or be bothered to report what they witnessed. It was my word against his. The cops took my boarding pass and ID. When they were occupied with Rambo, a man, reluctantly, came over to me with his business card. Two lawyers, leaving for vacation with their wives (wives saw everything), decided to not leave a statement, but did want to help so he gave me their cards, and told me that if Rambo really did press charges, they would represent me for free. I blinked, and the four of them were gone.

I kept telling the mall cops to check the security cameras for God’s sake! There is a distinct difference between a spanking and a beating…surely they caught it on film!? Then a black woman quietly came over. When the focus was back on raging Rambo still yelling about pressing charges, and I should be thrown in jail, she thanked me for intervening. She said it COULD HAVE REALLY GOTTEN OUT OF HAND!!! I looked at this wife of Rambo man and the mother of that little girl and thought, “Oh, honey! If you don’t think THIS is completely out of hand, what is he doing to you both at home?” I felt sick.

The mall security minions gave me papers, in case he pressed charges, my boarding pass and ID, and let me leave. Antonio and I were shocked the plane was still there at the gate past departure time. They actually waited for us! Can you get how that, alone, is miraculous? I walked onto a full and silent plane. Yes, silent. No one said a word to me, but they all stared. I took my seat next to a window, and as we taxied and took flight, I started to cry. I realized that I blacked out where the incident was concerned. I saw the abuse inaction, I saw no one was coming to help her, I dropped all my things, and (i was told) I shot my body into the black cement wall of a man in order to set his little victim free from his grip. I was impressed and terrified by my actions. As we flew towards home, my inner critic voice was whispering, “You finally cracked”. The evidence: I blacked-out and attacked another human being! A human being who was two feet taller than me and 4 times wider. I am officially insane.

When we made our way to the exit doors, near baggage claim at the KCI airport, people were staring and pointing and whispering. Then one by one people and their drivers came up to me, saying: “This is the person I told you about! This little lady saved that little girl”. I had about 12 people singing my praises before we walked out.

Where were they when I needed people to testify to the cops?! People are weird. But, then again, I believed I had a psychotic break, thus no room to judge… just saying. I would be calling my shrink first thing in the morning.

We human beings are capable of anything, under the right circumstances. Heroism, murder, rape, abuse, generosity, forgiveness… for which we are capable. There is no room for self-righteousness… the lie of “I WOULD NEVER….”? Bullshit! You certainly COULD and would, if the circumstances lent themselves to it.

Compassion. Compassion for Rambo, the wife, the daughter, the security, the “ants” and for myself. I could have played anyone of those roles, in any given alternative situation. I am not above or beneath any action or reaction, as the case may be, as long as I am a human on this planet. Hooker, Junkie, Humanitarian, Solider, Jet setter, Homesteader, Cat Lady, Nun… it all lives in me and in you. I saw something that said, “There are two wolves that live inside each of us, one is the wolf of loving kindness, and one is the wolf of fear and hate… the one that leads is the one you feed.” I like that.

Each person has a war within them, their own “play station” game. We are all trying to get to the next level, .evolve as people. We all want less suffering and more pleasure, in whatever form we attach the definition to. Remember that as we judge ourselves and all others. We all have everything within us. Every day that we choose compassion and understanding over judgment and hate is a “score”. Every day we feed the wolf of love, we strengthen that in ourselves. A true athlete has failed more times than a loser has even tried. When you screw up, get up, shake it off, learn from it, and keep going forward!

That’s all from the non-judgment zone… compassion for all! I believe in you!