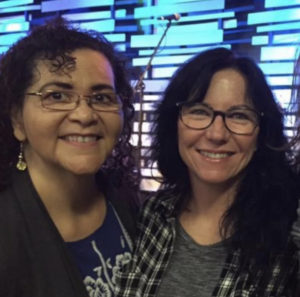 Let me tell you about my friend Dee

Dee Clarke passed away on Halloween after struggling with her lungs for some time. Such a drag. It hit me hard. We had a unique relationship. We both started our non-profits in 2015. Dee’s: Survivor Speak USA. Mine: Stop Trafficking ME, then US.

Dee and I met in … well 2015. She had already been deep in social causes long before anti trafficking. As a survivor, homeless, trying to help her two children evolve beyond stereo types, she used abused and remolded “the system” for the sake of her beloved children. For example, her son told this story at her celebration of life…

When a family is living in a shelter they don’t have a mailing address, so, they cant attend school. My Mom researched the best elementary school and lied about the address. A retired welfare worker was also at the celebration of life and added, Dee drove her son to school every morning in a car without tags! She figured it out…she found a way…she made it happen. When her son wasn’t given the opportunity to test in for advanced math, Dee fought back and got him the opportunity…and he qualified…later growing up to be a doctor. When he couldn’t attend events in the Boy Scouts because it was father & son only… Dee fought the system and the Scout rules were changed.

She fought for homeless issues, community issues that affect the poorest among them.

I met her when she was holding groups for sex trafficked survivors at the Salvation Army. When she and a local police officer (Steve) would get calls from victims in need of help other than during the M-F 9-5… THEY picked up the victims and funded hotel rooms, food and whatever they needed until the community help center was available. Dee walked the tracks to give the ladies a contact point person…when they were ready, they knew she was there.

Dee was a talented writer and was awarded the opportunity to write a play about her life called “Last Girl”, about her life. She was a dancer… a lover of life! She was so proud of her daughter who is a professional dancer and fitness expert… who, by the way, was recently on the Wendy show! Whoop Whoop!

She and I found ourselves in undercurrents of divisiveness…people with agendas causing trouble between she and I. I remember one woman high up in the trafficking world inviting me to lunch and telling me about the gossip/back stabbing. I was SHOCKED. So hurt. I went to Dee directly and we had a very long conversation including an apology. It seemed, so she explained, the people in her world didn’t trust me. So they did to me what they assumed I would do to Dee. So… I went our of my way to turn up the love.

If she asked me to go with her to the state house, I went. If she asked me to do anything… I did it. I never set up a table or flyers… instead I took pictures and videos of her and what she was doing and promoted her. When I was asked to be the survivor speaker for the social worker annual conference, I asked them to let Dee be the speaker. Dee asked me… WHY? When I asked her for materials to bring to the White House… nothing. When I came back Dee invited me to her home for tea. She apologized and said that her people didn’t know me as well as she did.

Dee and I had an understanding. We loved each other. I respected her. I did what she said. I had contracts for any survivors I used… in fact I used a contract, paid them well, brought in hairdressers and make-up artists. Dee showed me how some groups and organizations exploited, survivors and it was vital that we treat our survivor sisters with the professional dignity we would treat others. She talked me through what the contract should say.

She was experienced and wise. She was a good woman. I loved her. I loved her smile, the way she moved, the way controlled, the toughness of her skin and the softness of her hands…

She is irreplaceable. What made her is long gone. She did that.

Although “they” meant to divide us… we united. They wanted us not to be friends… but we were. We really were.

So when I found out about Dee’s death, I reached out and made the suggestion of a video memorial like we did when my friend Frank died this fall. I offered to pay for it. I didn’t hear anything until right before the celebration of life. I was told they liked the suggestion and were going to have their people create it.

I saw online when and where the celebration was going to happen.

When I arrived I was told repeatedly that they were surprised I came. Im not sure why. Ok Im not really surprised. But this was my last opportunity to kill’m with kindness… but this time Dee was watching from a different seat in the house. Lol!

I cried a lot during the service. I loved Dee. I respected her. We needed her and she was gone.

About half way through they played the video… not one picture of she and I. There was a few pics of us on the wall of pictures of her life. Cry cry cry…

They had speakers lined up and before intermission asked me if I would speak. And I did.

She was beautifully honored by all. Police weren’t allowed. Steve should’ve been there. Just sayin

I was worried about her dog Daisey…

It was an amazing service all in all. I have a feeling that some organizations are relieved shes gone. She was powerful. I cant imagine who could ever fill her shoes.

So much of this craziness…except for Dee… turned me off from working within the anti-trafficking movement. Such division. Such exploitation.

What unites us is so much more than what divides us. Dee knew that. I know that. You know that.

I get that my thinking…do whats right because its right… is to simple for some. I get it.

Like Dee, you can try to block my sincere effort to help… and it may work for one thing or another…but Ill find a way. BECAUSE helping and prevention IS the right thing!

I hope Dee doesn’t help. I hope she is breathing deep and free…dancing in heaven!